Now Trending:
Home
Activity Trackers
Fitbit Zip Wireless Activity Tracker is colorful and tiny
This post may contain affiliate links to our partners. It means that we get a commission if you decide to purchase on their sites - at no cost for you! Read more at the bottom.

Say hello to a small and cool fitness gadget, the Fitbit Zip Wireless Activity Tracker. If you have a hard time getting the right motivation to get out of the couch, this tiny little helper will definitely help you out. This training gadget is great for beginners who are just entering the world of exercising and fitness.

You will see fast progress and will be a healthier person in no time. This particular gadget doesn’t have a lot of fancy technology like sleep monitoring, heart rate monitoring which you find in other fitness trackers, but the price compensates for that.

This gadget it’s actually one of the most inexpensive tools you can buy to track day to day activity!

With that said, this little device is more than a pedometer. It tracks your steps, the distance you have walked and how many calories you’ve burned. With the smart fitness gadget Fitbit, you get exercising just by walking and that’s training everybody can do. And the best thing is that you get motivated to keep moving and go a little bit further than you normally would.

Be sure to watch the official Fitbit Zip Wireless Activity Tracker product video further down. Here is what it looks like:

Clip it to your clothes or wear in your pocket.

The product is created by a company in San Francisco naturally called Fitbit. They are a manufacturer of several other wearable activity trackers as well, like the Fitbit Flex wristband and Fitbit One clip. The Zip was released in September 2012 and was the smallest and cheapest of their activity trackers. It was also the first device without a rechargeable battery.

The company has received many awards for their products including the ‘CNET Best of CES 2013 Award Winner’. They have a huge fan base around the world which loves their genius and colorful devices.

The Fitbit Zip Fitness tracker is so small you can have it in your pocket or attach it to your belt or bra with the silicon clip that follows in the box. Be careful not to lose this precious little thing. The small gadget possesses leading-edge accelerometer technology which captures your activity in all directions regardless which way it lays in your pocket.

When the Zip is on you can tap the display to switch between 5 viewing modes. They show today’s steps, calories burned, distance walked, a handy clock and a smiley face. The little face has two states; it’s either smiling or stick its tongue out at you. The device is constantly tracking even if the display is asleep.

The device is rain and splash proof so don’t worry about walking in the rain or get sweaty on a tough exercise.

On PC you install the Fitbit Connect software and make a free account. Use the USB dongle on your PC to connect with the Zip.

On smartphone and tablet, you download the free Fitbit App for either Android or iPhone/iPad/iPod. All the data is synchronized via wireless Bluetooth. The app also makes it possible to log your food and water intake, weight and goals. You can track your progress and compete with others.

You get rewards for daily, weekly and lifetime achievements. Perfect boost for your motivation and health!

Thousands of people love their Fitbit, and it’s in many aspects the best fitness activity tracker for ordinary people. It is easy to use and not overloaded with advanced options.

Click here to read more about the benefits with activity trackers.

If you set up your gadget with stride lengths and wear it as recommended by Fitbit, the measurement accuracy is between 95-97% which is not bad.

The replaceable CR2025 3V lithium coin battery lasts for around 4 and 6 months. It’s cheap to buy a new one, and you don’t need to remember to charge the device which is a good thing in my opinion. The battery is changed by opening the device with the included battery tool.

Even if the Fitbit Zip originally was meant as a clip, it is now possible to buy accessories that transform it into a wristband instead. These are not original products but works very well. There are tons of different colors, and some have patterns as well. I like this upgrade which makes a cool small size clip tracker into a wrist-worn fitness tracker.

Also, check out the other activity trackers from Fitbit in their store or read my article on how to chose the right one.

What’s In The Box?

If you want a small activity tracker you can hide in your pocket and don’t want those fancy smart watches or fitness trackers you put on your wrist; the Fitbit Zip is perfect. The price tag is also cheaper than the more advanced trackers. This product is more suitable for daily everyday tracking of steps rather than used for training.

Where Can I Buy Fitbit Zip? 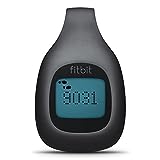 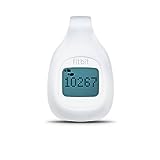 US: Purchase on Amazon.com.

If you want more info before buying, check out the Fitbit Zip reviews from other users here.

Do you have any questions or comments on my Fitbit Zip Wireless Activity Tracker review, do not hesitate to leave me a comment down below.

Copy the code below and paste it into your resource page or sidebar:
This website uses cookies to improve your experience. We'll assume you're ok with this, but you can opt-out if you wish.Accept Read More
Privacy & Cookies Policy
Necessary Always Enabled