Now Trending:
Home
Activity Bands
The Nike Fitness Band
This post may contain affiliate links to our partners. It means that we get a commission if you decide to purchase on their sites - at no cost for you! Read more at the bottom.

The Nike fitness band, FuelBand, was released in 2012. A couple of years has passed so you can almost count is as an old-timer in the activity tracker marked. A while later an upgraded version the Nike+ Fuelband SE Fitness Tracker

was introduced to the hungry health gadget marked. The two fitness bands look very similar on the outside but the new one has some minor upgrades which made it a bit easier to use.

In 2014 it was reported that Nike no longer will focus on the FuelBand and continue work with other intensives so maybe one of the reasons to pick one up in the store is simply to have it as a collector’s piece. Tough competition among the brands and a product that didn’t perform well in the marked was Nike’s explanation.

So this is certainly not a new gadget and it might be strange to write about a discontinued activity tracker, but it’s a cool product and still possible to buy both new and used version. Let’s start out with looking at the few differences between the two Nike fitness bands.

At first glance it is difficult to see any huge differences between the first generation of the Nike fitness band and this Second Edition. Physically they have the same size, same clasp, display and button. They both come in the same three sizes – small, medium/large and xtra-large. Apparently, the new one is a bit more water resistant than the original, but you still can’t take it for a swim.

The Second Edition comes with a few new color choices which are yellow, orange, pink and black. The original was only available in black with a steel clasp. Some limited edition versions with other colors were also made.

It’s an unusual design choice to have most of the coloring on the inside of the band, but that’s just how these Nike bands always have been. The only visible colors when worn on the wrist are a small stripe and the logo.

The interface is still the same with an array of 100 white LEDs as the main display which show you NikeFuel earned, calories burned, steps taken, the time and hours won. I’ll get back to the ‘Hours won’ feature. The button next to the display is used to cycle through the information. On the Second Edition you can double tap the display to show the time.

The second row of 20 colored LEDs from red to green shows you your daily goals and how far you are to reach them.

An in-built ambient light sensor makes sure the LED’s are dimmed during daytime to save batteries.

Along with the introduction of ‘Sessions’ and ‘Win the Hour’ the only other important new feature is the possibility to connect to devices with Bluetooth 4.0 automatically. This enables you to see step count and other things the band monitors in real-time on your smartphone or tablet.

Here is a comparison chart that shows the differences between the first generation Nike +FuelBand and the newer Nike+ FuelBand SE:

Earn your NikeFuel points by moving

Nike’s philosophy with the band is that it should be fun to move and they reward you by giving you fuel points. So after you’ve set up your account with height, weight and daily goals you are ready to collect points during the day based on your steps and wrist movements.

This is called NikeFuel and is a way to measure your activity level which is important when you compare yourself with your friends and online community and your own personal results of course. If you want to compare with friends they have to have the FuelBand as well.

Your daily goals are reached when the bar of colored light has been lit all the way up to the green LED’s. With no movement you stay on the red side.

Even if cheating your point considered bad manners, there is actually a possibility to tell the app that you really worked harder than the device managed to measure, so you’ll end up receiving more NikeFuel. It’s especially useful in hard uphill running sessions or a hard bicycle training when the device hasn’t fully registered your movements according to yourself. In a way it’s Nike telling you the band is not suited for all kinds of activity. 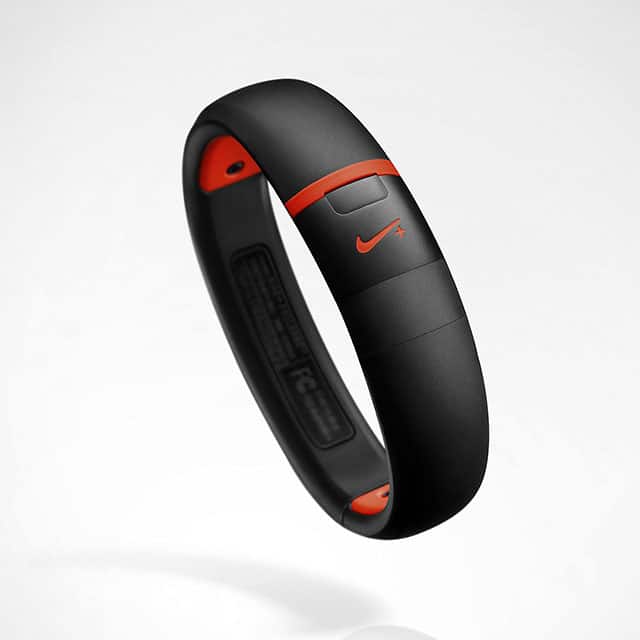 ‘Sessions’ is a way to tell the gadget what kind of activity you are doing right now and the list in the mobile you can choose from is long. This is probably the best feature of the Nike fitness band and is perfect for exercises where your hands and wrists are not moving much.  You’ll have to choose a Session and start it from the app on your smartphone or tablet. There are many different sport genres like skateboarding, snowboard, tennis and basketball. And it’s here you’ll start the Sleep monitoring – it’s a Session.

This is also a nice feature new which is supposed to motivate you to move more. Every hour you need to be active for 5 minutes and then you “win” an hour. The goal is to collect hours and manage to stay active the whole day more or less even if you are working or attend classes.

To set up your profile and be able to transfer data from the band you’ll have to install the Nike+ Connect software on your computer. It’s also here you’ll check out your statistics, set goals and keep in touch with your training buddies and online community. You’ll also need the Nike FuelBand SE App installed on your smartphone or tablet. A long time only iOS was supported, but now you can use it on Android too.

A nice motivational tool is the ability to unlock trophies when you have reached certain goals. And you can of course overview your daily, weekly or monthly goals and compare your achievements with previous days and examine them up against people’s results with similar age and gender.

If you are a whole bunch of guys owning FuelBands you can form a group and compete, motivate each other and share results. 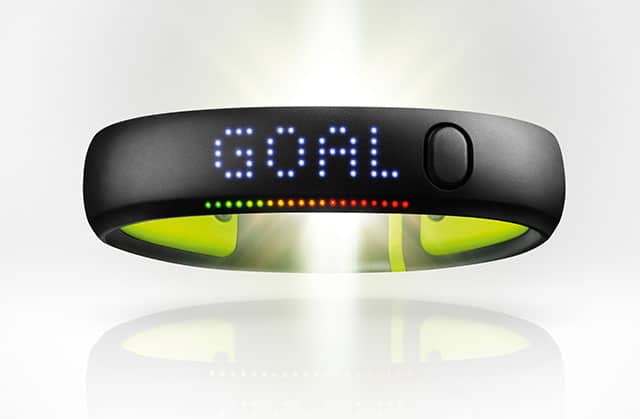 According to Nike the rechargeable batteries lasts for 4 days, but several users claim they actually lasts for as long as 8 days. The Nike fitness band is charged by either using the USB cable that follows or just by plug the device straight into a USB port.

You can hold the button down for a few seconds to view how much battery that’s left.

What’s In The Box?

This is a quite expensive fitness band in comparison with other activity trackers these days. The second version has better step tracking and is a tad more water resistant, but it’s only enough for showering and running in light rain. If you are interested in gadgets and activity trackers I would buy this solely for having one before they stop producing it as an artifact.

I would also consider Jawbone Up24 or Fitbit Flex .

Where Can I Buy Nike Fitness Bands?

US: Purchase this gadget on Amazon.com.

UK: Purchase this gadget on Amazon.co.uk.

If you want more info before buying, check out the user reviews on Amazon.

Do you have any questions or comments on my Nike Fitness Band review, do not hesitate to send me an e-mail on andreas@newfitnessgadgets.com or leave me a comment below.