Now Trending:
Home
Activity Bands
Fitbit Versa keeps tracks of a lot of activities, but have some shortcomings
This post may contain affiliate links to our partners. It means that we get a commission if you decide to purchase on their sites - at no cost for you! Read more at the bottom.

Does Fitbit try to mimic Apple Watch with their new Versa?

Fitbit’s second smartwatch production: The Fitbit Versa is a far cry from the Fitbit Ionic. This huge contrast between the two products of the same company could be due to the Versa’s slightly disappointing predecessor. Its perfect battery life and slick design make it a fitting competitor to the more expensive smartwatches like the Samsung brands. Then again the lack of inbuilt GPS is somehow a bummer that has affected its popularity.

With the Versa, you can keep tabs on a wide variety of activities, including running, swimming and cycling, and its menstrual cycle tracking is another hugely intriguing feature about the Fitbit Versa. Unlike many other smartwatches, it’s also well compact making it look good on users with slim wrists. 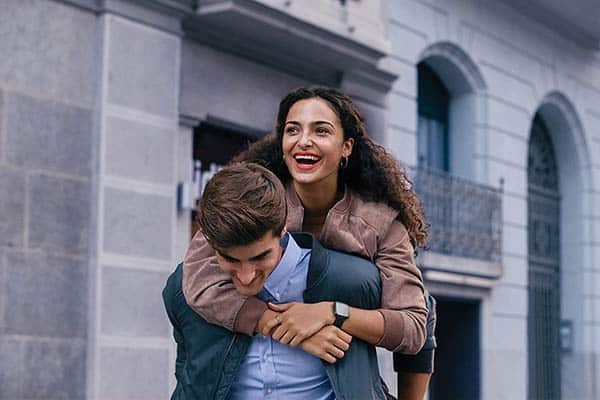 The Fitbit Versa just like all the other smartwatches is packaged with the Fitbit Versa, a USB charger/data cable, and a user’s manual.

For the Versa, Fitbit hasn’t only updated the design of one of its prior or existing wearables; but it has a whole new look and maybe one that seems more Apple Watch-like than none of the company’s previous devices.

It boasts of the `Squircle’ watch face design, that is, a square face with rounded edges – in case you need to know what this means.

Despite its awkward design name, the Versa is a much more attractive and friendly-looking watch than most of the Fitbit`s previous devices, especially the Ionic, which you are going to admit that it has very few fans. 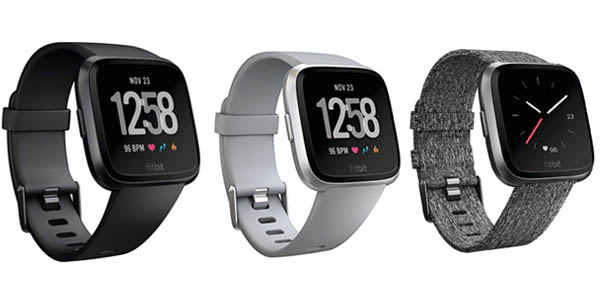 In comparison, to other watches the Versa is harmless-looking, making sure that you are left to only concentrate more on what’s happening on display.

The Versa isn’t only eye-catching but could be one of the most comfortable smartwatches Fitbit has made credit to its featherweight.

On the left-hand side of the Versa sports, there is one main wake-up/back button, while on the right you will notice two smaller pause and `done` workout buttons. These are very simple to press and have proved to work very well while using the Versa for both focused exercise and day-to-day wear.

As for the Versa’s display, it’s a vibrant, colorful touchscreen with a brightness up to 1,000 nits. The display feature ensures that even in direct sunlight or underwater it’s easily visible, even when not turned up to the maximum brightness capacity.

Touch commands also seem to be much improved over the Ionic, which seemed to suffer a little from latency. Now commands seem to be fluid and uninterrupted.

The Versa’s ability to stay for long minus charge puts other smartwatches in the shade.  With this watch you can expect to last for at least four days off a single charge, this according to real-life results show it to be a conservative estimate.

When I tested it, the Versa comfortably kept on for up to four days. Connecting it to my phone via Bluetooth, it lasted for almost five days; when it was untethered, it managed six days.

Over and above this, if you want to extend that even further, you have to set the screen’s brightness to dim rather than automatic.

These are super-impressive figures, which pretty much put the Versa at the same level as the Fitbit Ionic. However, the other smartwatches don’t come any closer. The Apple Watch, for example, needs to be charged every night.

The Versa also comes with a clip-in charger, into which you place the watch by squeezing it open. From flat, you’ll be back up to 100% in around two hours.

Other features and specifications

Unlike the Ionic, you will realize that the Versa doesn’t have GPS built-in. What this means is that, if you want to track your running route, you’ll need to take your phone out with you too. That’s a big deal, and it’s one of the main reasons the Versa costs so much less than the Ionic.

However, what the Versa does have is enough onboard storage for around 300 of your favorite tracks of music, which you can play through a pair of Bluetooth headphones. This ability will allow you to go phone-free in the gym, which is great. For running, however, it makes more sense to play music through your handset, as you’ll probably have it with you anyway because of its GPS capabilities.

The Versa is water-resistant to 50 meters so that you can wear it even in the pool, and it does most of its tracking with the use of a 3-axis accelerometer, 3-axis gyroscope, optical heart rate monitor and altimeter.

Those sensors enable the Versa to track a wide range of activities including running, swimming and cycling. It also tracks your walks and general workouts, such as weight-lifting and interval training, and monitors your steps, distance covered, floors climbed, calories burned, heart rate and sleep.

For someone who may be new to smartwatches, this may seem like an annoying lot – but what’s important here is how easy the Versa is to use. It runs Fitbit OS 2.0, which is intuitive, simple to navigate and lets you access the watch’s key features with just a few swipes and taps.

To track a run, for instance, swipe left on the main screen, tap the exercise icon and select Run. For other types of exercise, you swipe through the tabs until you land on the right option. To begin tracking, hit the Play button, which you can tap again to pause GPS tracking. You can bring an end to your workout by hitting the chequered flag icon.

To quickly view your stats for the day, including details of any workouts you’ve completed and your progress, just swipe up on the main screen. 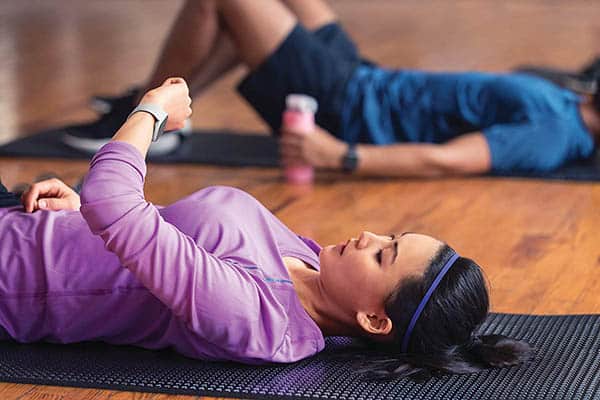 For training and exercise.

Apple Watch 3: The Apple Watch 3 is a true smartwatch that even offers LTE so that you can use most of its features without a phone.

It’s more stylish than the Fitbit Versa too, and while it’s a real smartwatch its fitness features aren’t lacking – it has GPS, which the Versa doesn’t. But of course, the Apple Watch 3 is also a lot more expensive.

Fitbit Ionic: If you’re a little bit more into your fitness, especially running, the more expensive Fitbit Ionic might be a good alternative to consider as it offers more dedicated fitness features such as in-built GPS tracking – meaning you don’t need to take your phone out with you when you go for a jog.

However, it’s not quite as pretty as the Versa, so its design might not be one for you if you plan to use it even when not working out.

Samsung Gear Fit 2 Pro: Samsung has a lot of experience making smartwatches now, and the Gear Fit 2 Pro is arguably a decent alternative wearable device for dedicated fitness tracking, especially if you’re not looking to break the bank.

Because it’s a fitness band and not a smartwatch, it now retails at a much lower price than the Versa. We love its intuitive interface, great AMOLED display and good activity tracking features as the key highlights.

There are some issues such as a lack of apps – something the Versa suffers from too – but that’s something that’s improving all of the time. Plus it’s waterproof so you can take it into the pool too.

When unboxing the product you will find the following:

Check out this official product video before my final verdict.

While its feature set isn’t quite on par with that of the Fitbit Ionic, the Versa feels the same watch in a different, lighter and friendlier design.

It also brings a clear, bright and beautiful screen, a new and improved heart rate sensor that will be updated with even smarter functionality via a firmware update later in the year, smart notifications, contactless payment capabilities and all the features Fitbit users will have come to know and love. 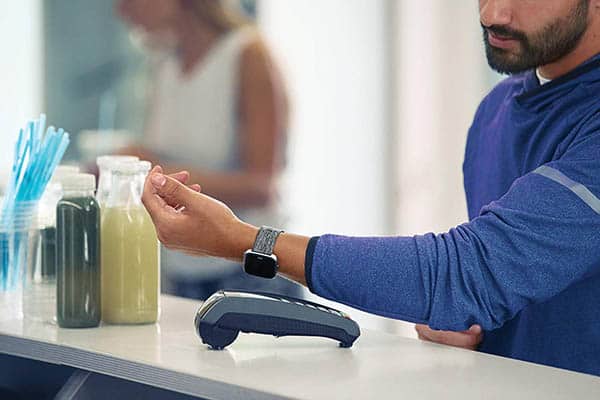 Why buy the Fitbit Versa?

If you loved the Ionic, you would love the Versa. In many ways, the Fitbit Versa is an improvement on the Ionic. It’s far better-looking, more lifestyle-friendly and has a similar feature-set – and all of this comes wrapped up in a device that costs significantly less money.

You can use it to monitor a huge range of activities too, including swimming, and it’s easy to use. Battery life is another feather in its cap; most other smartwatches on the market don’t come close.

However, as an actual smartwatch, it’s limited right now. This will hopefully change shortly when Fitbit rolls out planned updates, but it might be worth waiting until those are released before buying the Versa. Currently, it feels like a work in progress. Some users will find the lack of apps frustrating, and it’s disappointing that we still have to wait for features that we expect from a smartwatch, such as quick replies to messages.

The lack of built-in GPS is also a big miss and means you’ll be tethered to your phone when you’re out running. Although not the worst thing in the world, we’d prefer it not to be necessary.

The Versa is undoubtedly a step up from the Blaze, but right now it feels like a smartwatch for casual users who are looking to make small improvements to their lifestyle and try a smartwatch for the first time. With that in mind, serious runners would be better to consider the Ionic, or the slightly more expensive – but more attractive – Apple Watch Series 3 GPS. 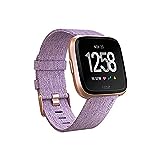 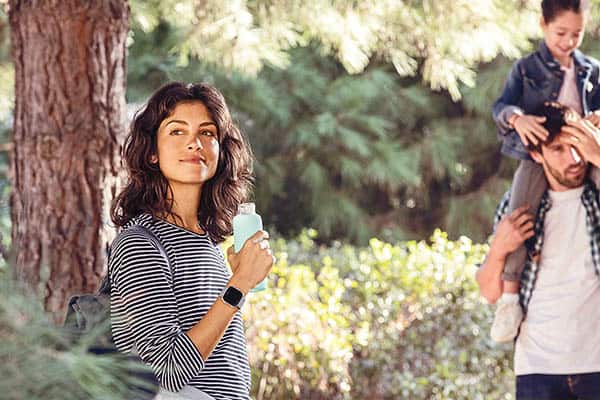 Perfect as your first smart- and training watch.

Write down your questions and comments in the commenting section below. The tracker doesn’t get a top score from all buyers, but here are some examples of what other happy Amazon buyers have to say about this activity tracker:

“Kudos to Fitbit on the new Versa! This is the fitness focused watch to get at a fair price!” by Kevster5

“Glad I purchased this over an Apple watch” by JC

“Love the large screen” by Jmin22

Hope you found my smartwatch review useful. See you next time.